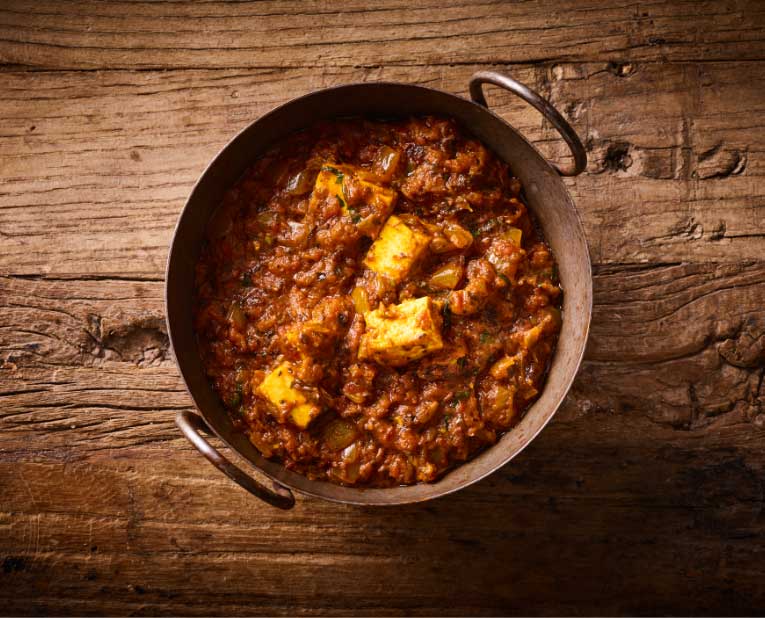 In Bindia’s Paneer Jeera Masala you will get a bite of the true, authentic India - raw and undiluted and with lots of exotic spices… but it is still Jeera that’s in charge.

”Jeera” means cumin and ”Masala” is the name of the countless spice blends, which traditionally are made from scratch in the Indian households. In the West, the Masala spice blend is best known as the curry powder (sometimes called “Garam Masala”) even though it’s not quite the same.

Tempering is a specific spicing method common in India and its neighboring countries. During tempering, grinded spices are stir-fried at burning hot temperatures. When the crushed spices hit the boiling fat, they produce a heat shock response by discharging their essential oils and, thereby, rich flavor. And, of course, we do the same in our Paneer Jeera Masala with cumin and other exciting spices, including ajwain and turmeric.

”There’s a tendency in the West that an Indian curry should be puréed, almost mashed into into a porridge,” says Amer Suleman. “But in my Paneer Jeera Masala, I want you to be able to see, feel, and taste everything – in a raw and undiluted sense.”

Obviously, cumin is the most influential spice in this authentic Paneer Jeera Masala. It doesn’t just add depth to the other spices, but simultaneously compliments raw materials like ginger, garlic, onion, and tomato.

While “Jeera Masala” basically means “cumin spice blend”, “Paneer” is the name of a popular fresh acid-set cheese created from cow or buffalo milk. Paneer is no longer just popular in its home country but has gradually gained quite some traction in the West as well. Being low in fat and high in protein, this fresh and filling cheese has increasingly become a sought-after source of protein in many meat-free dishes.

As Paneer has a mild taste and open structure, it easily absorbs the taste from the food and spices that it is cooked together with, like the rich and supportive Jeera.

Try our Paneer Jeera Masala at your local Bindia in Østerbro, Nørrebro, Frederiksberg, Amager, Lyngby, and Søborg, or simply order it here.