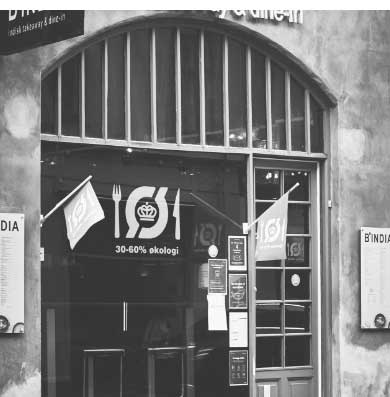 Healthy and delicious Indian take-away in the heart of Frederiksberg

This is the second oldest Bindia, only surpassed by our restaurant at Trianglen from 2003. The place was bought in 2007, but due to the success we experienced in our big restaurant at Trianglen and our former take-away shop on HC Ørstedvej, there were hardly any time to open the shop properly before 2009. The following 12 years, the facilities on Gammel Kongevej simultaneously functioned as Bindias production kitchen until our current headquarters in Hvidovre opened in 2017.

Bindia on Gammel Kongevej is usually used as a take-away shop by the local Frederikberg citizens. Yet with seating for 10, we have plenty of room for you to enjoy a delicious Indian classic like our popular butter chicken or one of our many vegetarian and vegan dishes, while having front-row seats to the busy life in one of the city’s most iconic streets.

You’re welcome to take advantage of our Orange Prices when you dine-in at Bindia. All you have to do is order and pay on bindia.dk and use the comment field to let our staff know.
Read more about dine-in here.

In 2021, a prominent role was bestowed upon our Frederiksberg take-away and dine-in, as it became part of the setting in the final episode of season 8 of the classic Danish comedy series Klovn starring comedians and writers of the show, Frank Hvam and Casper Christensen. The series has always taken part in and around this historical area and known shopping street, and in season 8 it was time for our Frederiksberg shop to partake in the show as Frank’s favorite place for take-away and catering.
Take a tour of our Bindia on Gammel Kongevej here.

Gammel Kongevej translates into Old King’s Road and is likely the oldest street in Frederiksberg. It stretches from Frederiksberg City Hall about 500 meters from our take-away shop and dine-in, and all the way down past the most southern part of the Copenhagen Lakes and the Planetarium.

The current length of the street is, however, far from what it used to be in its earliest days. Back then it continued way beyond Frederiksberg City Hall and all the way past the Damhus Lake and further to the city of Roskilde.

For this reason, the name Roskildegaden (Roskilde Street) was sometimes used until the name Kongevejen (King’s Road) or Ny Kongevej (New King’s Road) was granted in 1662. The name arrived from the fact that this piece of road was reserved for the royal family when they needed to leave the city.

From New to Old King’s Road

It was not until 1705 when King Frederik IV constructed what we today know as Frederiksberg Allé as his personal route from Vesterbro to his newly planted royal garden (today known as Frederiksberg Have or the Frederiksberg Gardens) that Gammel Kongevej officially became the former King’s Road and received its current name while, at the same time, opening for civil traffic.

It was still a far cry from the chic shopping street that we know today. The road was for the most part desolate and not easily travelled as it was fobidden to build larger buildings in the area until 1852 due to concerns for keeping inner Copenhagen safe from attacks. It was not until these military defense zones were repealed that Gammel Kongevej started to take shape as large villas were erected, and multistorey tenements soon followed suit.

By the end of the 19th century, Gammel Kongevej as it appears today began to emerge as many villas were demolished to accommodate more tenements while all ground plan tenancies were turned into shops of various kinds. Like that, one of the most busy and iconic streets of Copenhagen was born – and we are both delighted and honored to have been part of the history and commercial life here since 2009!

No matter if you’re a visitor or a local looking for healthy and delicious take-away, we’re ready every day to assist you with the best Indian classics created the Bindia way.

We will serve you large, healthy portions that are furthermore well-suited for refrigeration and reheating. Read more about our recommendations for reheating our take-away here.

As a matter of fact, the good, old-fashioned Indian cooking methods, which we proudly preserve and continue, provide the food a natural and sustainable durability and are a key factor to how we can all help minimize food waste.

A true Indian curry takes a long time to make as it requires many hours to simmer and settle. The very final part of the cooking is not done until your order is placed – and we never use more than you “take away”.

Bindia actually wastes so little food that, in spite of an already signed collaboration contract, the initiative against food waste, Too Good To Go found it completely pointless to include us on their app.

Since 2015, Bindia have been certified with the official Organic Cuisine Label as we were the first Indian kitchen in Scandinavia to focus on ecology and sustainability. Furthermore, we never use preservatives, additives, or food colouring, and never deep fry anything.

At Bindia, we have a crystal-clear ambition of continuing to become even greener and in 2020 we therefore decided to make our take-away packaging more eco-friendly. Everything from our take-away bags to our menu cards and take-away bowls are now made from 100% recycled, non-bleached paper. Both the paper bags and menu cards can be recycled as paper. However, we recommend re-using the paper bag as much as possible first.

This way you can enjoy the best Indian take-away with a clean conscience!

No items selected yet.