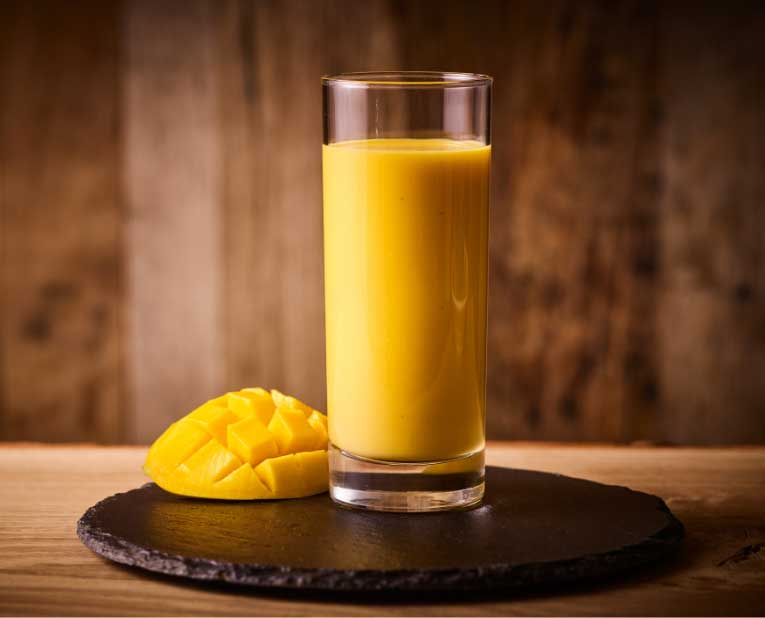 The Lassi – or Buttermilk as the Indian usually prefer to call it – is a refreshing yoghurt drink that is quite widespread in India as well as its neighboring countries Pakistan and Nepal.

The base of a Lassi consists of yoghurt, water, and a few spices. It’s either served as a sweet drink (the “Sweet Lassi”) with sugar and/or fruit added or as a salty drink (the “Salted Lassi”). Even though we are not familiar with much else than the Mango Lassi in the West, it is actually the salted version that is the most popular choice on the Indian subcontinent.

Originally, the Buttermilk came from the surplus liquids left from churning butter. Some versions of Buttermilk focus more on keeping the drink fat rather than the other ingredients.

An ice-cold Lassi is particularly popular on very warm days, as it isn’t just cooling and refreshing, but similarly supplies the body with calcium and important probiotics.

In Bindia’s Mango Lassi we neither use any sweeteners nor cream, which is common in some versions. We use nothing else than yoghurt, water, and mango. This keeps the Lassie light and highlights the natural sweetness of the Indian mangoes, which make up 40% of our Mango Lassi. And we only use the famed and cherished Alphonso mangoes known for their superior sweet taste and creamy texture.

The sourish yoghurt and the sweet Alphonso mango are truly an underrated combination!

Try our Mango Lassi for yourself at your local Bindia in Østerbro, Nørrebro, Frederiksberg, Amager, Lyngby, and Søborg, or by ordering here.