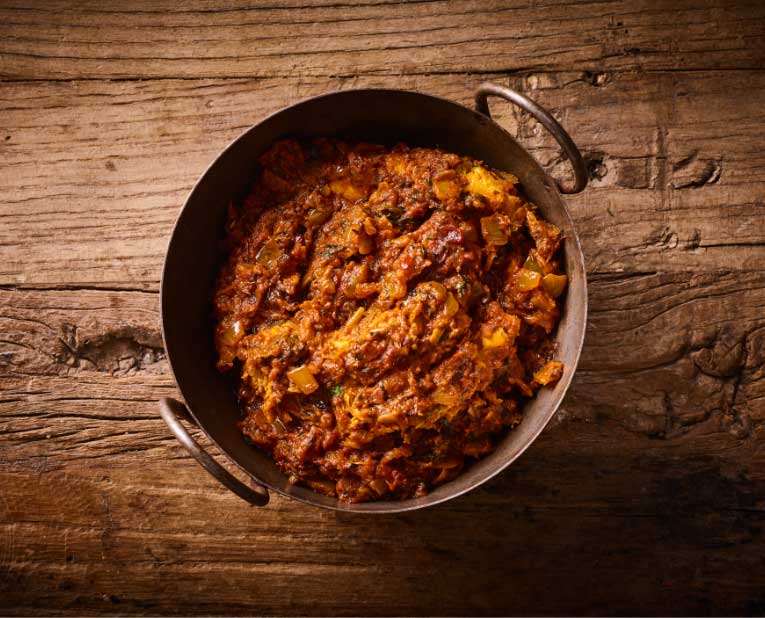 In Bindia’s Chicken Jeera Masala you will get a bite of the true, authentic India, raw and undiluted and with lots of exotic spices – but it is still Jeera that’s in charge.

The spice has a particular warmth and an almost smoky, nutty, or earthy taste. If added correctly in the cooking process, it can add depth to other flavors – even in tiny quantities and in dishes you wouldn’t suspect would be a fitting candidate for cumin.

Tempering is a specific spicing method common in India and its neighboring countries. During tempering, grinded spices are stir-fried at burning hot temperatures. When the crushed spices hit the boiling fat, they produce a heat shock response by discharging their essential oils and, thereby, rich flavor. And, of course, we do the same in our Chicken Jeera Masala with cumin and other exciting spices, including ajwain and turmeric.

”There’s a tendency in the West that an Indian curry should be puréed, almost mashed into into a porridge,” says Amer Suleman. “But in my Chicken Jeera Masala, I want you to be able to see, feel, and taste everything – in a raw and undiluted sense.”

Obviously, cumin is the most influential spice in this authentic Chicken Jeera Masala. It doesn’t just add depth to the other spices, but simultaneously compliments fresh raw materials like ginger, garlic, onion, and tomato.

Last, but not least, we use tenderloins from Danish chickens in our Chicken Jeera Masala. These we marinate in our own marinade of tandoori spices, which are spices that can handle the scorching heat of a tandoor oven. In our marinade these includes spices like ginger, turmeric, and fenugreek. Finally, we grill the meat at very temperatures to ensure that it doesn’t dry out, but stays juicy, tasty, and tender.

Try our Chicken Jeera Masala at your local Bindia in Østerbro, Nørrebro, Frederiksberg, Amager, Lyngby, and Søborg, or simply order it here.