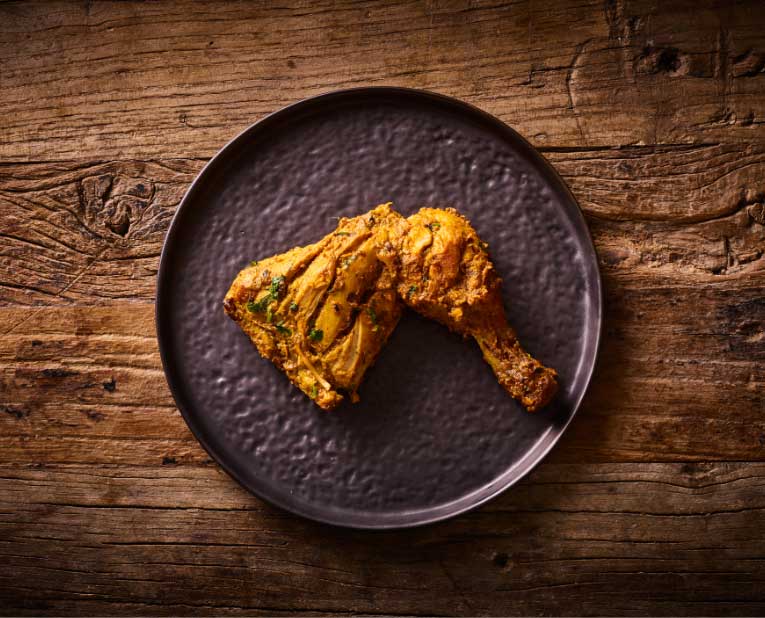 Just like Bindia’s founder and head chef, the Tandoori Chicken comes from Punjab in Northern India.

A hole in the ground

As the name indicates, Tandoori Chicken is chicken prepared in a tandoor oven. This type of oven has been used in Northern India for over 4,000 years. A real, old-fashioned tandoor is more or less a large hole in the ground with walls of clay and burning coals or wood at the bottom, which produce temperatures reaching up to almost 500 °C.

Depending on the type of food, a tandoor has several different cooking functions: for instance, you can grill meat or vegetables on skewers (a la shish kebab) or bake a naan bread by attaching the dough to the burning hot walls.

The food in a tandoor is cooked by exposure to several different processes, like the scorching heat from the burning fire as well as hot air and smoking processes. As a result, a tandoor gives the food a special taste and smell, which is neither completely grilled nor baked.

From his Punjabi upbringing, Amer Suleman, founder and head chef of Bindia, recalls the central role the tandoor played in the local community – both as a culinary multitool as well as a social focal point.

You simply brought your own dough and other kinds of tandoor-ready food to your local tandoor where you paid the owner to cook what you’ve brought. Here you met with family, friends, and other locals while the kids were playing and the tandoor burning. Thus, an old-fashioned tandoor was often burning all day and could draw quite a crowd.

Normally, Tandoori Chicken is associated with an entire chicken leg in the characteristic orange-red color, which originally stemmed from the abundant use of paprika in the marinade. As Tandoori Chicken grew increasingly popular, especially outside the borders of India, it became normalized to mimic the paprika with food coloring, to make it appear real and authentic.

At Bindia, we reject the use of food coloring. We have always preferred to make the food the old-fashioned way, as it was intended, with all the ingredients and procedures, which that entails. Therefore, we marinate the chicken in our own yoghurt-based marinade of tandoor spices (also known as “Tandoori Masala”), which are spices that can handle the scorching heat of a tandoor oven. In our marinade these includes spices like ginger, turmeric, and fenugreek. Finally, we grill the meat at very temperatures to ensure that it doesn’t dry out, but stays juicy, tasty, and tender.

Try our Tandoori Chicken at your local Bindia in Østerbro, Nørrebro, Frederiksberg, Amager, Lyngby, and Søborg, or simply order it here.