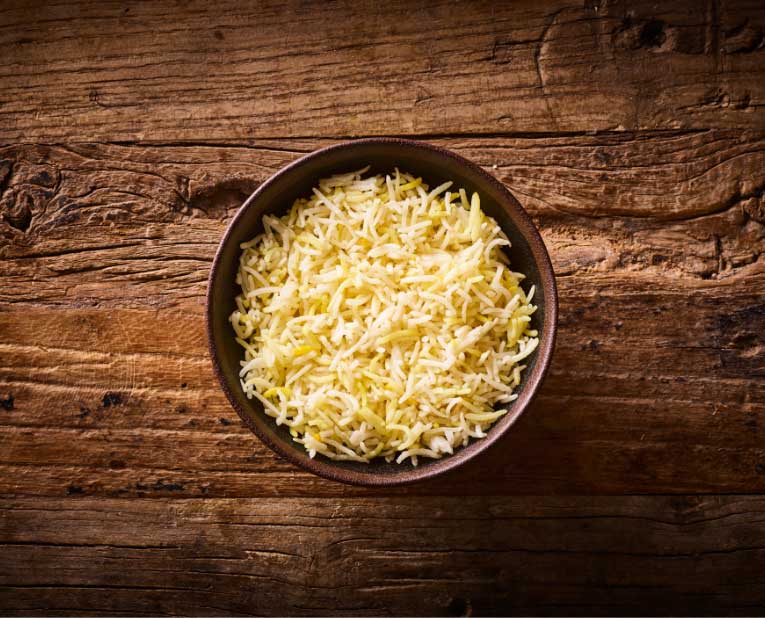 There isn’t any clear consensus on where exactly Pilao originated even though several sources point towards Persia or India.

Pilao is a method of rice preparation, which has reached as faraway places like the Balkans, Central and Southern Asia, the Middle East, East Africa, South America, and the Caribbean while keeping very similar sounding names like Pilao or Pilaf. Furthermore, it has inspired dishes like the Spanish paella or the South Asian Biryani.

Even though all countries have their own approach to Pilao, it is typically a dish, in which rice is boiled in a bouillon and mixed rice with meat or vegetables. As our Pilao functions as a side order to our food, it neither contains meat nor vegetables, which, of course, is somewhat atypical. Nevertheless, what makes it a Pilao is the way we boil the rice.

For preparing our bouillon, we first make a tempering of ‘warm’ spices like cinnamon, cloves, cumin, large cardamom, star anise, and bay leaves. A tempering is a specific spicing method common in India and its neighboring countries, in which grinded spices are stir-fried separately at burning hot temperatures. When the crushed spices hit the boiling warm fat, they produce a heat shock response and discharge their essential oils and, thereby, rich flavor.

By pouring water into the tempering, we get the bouillon, which we use for boiling basmati rice. Finally, and true to tradition, we add some saffron to provide the final touch and give the rice the classic Pilao color.

Try our Pilao at your local Bindia in Østerbro, Nørrebro, Frederiksberg, Amager, Lyngby, and Søborg, or simply order it here.