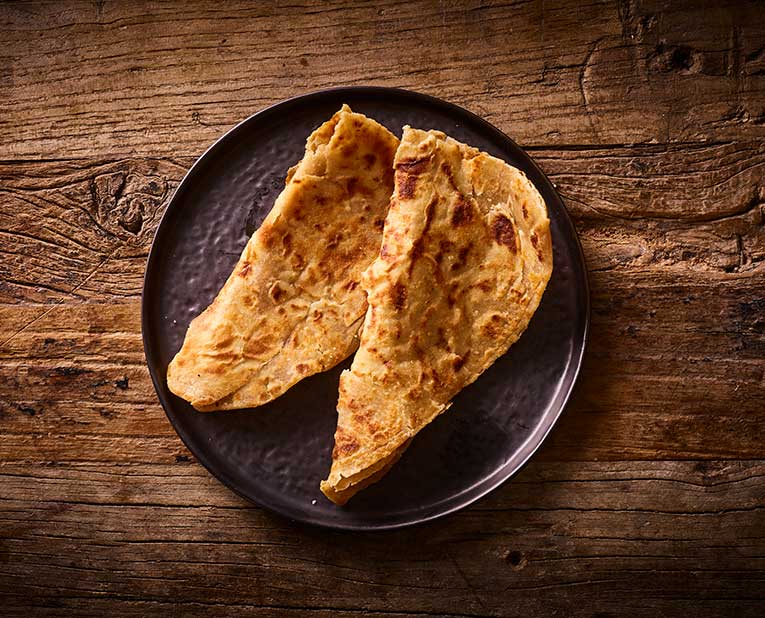 The Paratha is an unleavened flatbread, which originated on the Indian subcontinent. Stemming from Sanskrit, “Paratha” is Hindi and, more or less, means “layers of baked dough”, as the dough is folded making the final product a bread of several thin layers.

The Paratha isn’t just found in India and its neighboring countries like Sri Lanka or Pakistan, but also even further away in places like Trinidad & Tobago, Singapore, Fiji, and Malaysia – and with more or less the same name.

The bread is to a large extend associated with the North Indian kitchen and especially the region of Punjab where Bindia’s founder and head chef is born and raised. In his childhood, Paratha was a luxury item, which they might had once in a while during the weekends.

For a Paratha dough, all you need is some coarse wholemeal flour and some water. From the finished dough you mold small balls, which you then roll flat into the shape of a pancake. In order to get the characteristic thin layers and to avoid that the bread get as a dry as a Chapati, the surface is smeared with a relatively fatty lubrication like ghee or butter, but it can also be a spread of fatty nuts or like in Bindia’s Paratha: vegetable oil. The smeared dough is then folded and rolled flat again, so that the smeared layers are inside the bread. Via this technique, it is similarly possible to fill the Paratha dough with other ingredients between the layers. The most known version is probably the Aloo Paratha with mashed and spiced potatoes.

Paratha can be prepared in a Tandoor oven or on a pan. As the bread can have tendency to get too dry in an oven, our Paratha is a ‘Pan Paratha’.

As the main focus is on our curries and other main dishes, we serve the regular Paratha, which almost begs to be immersed in our delicious curries.

Try our Paratha at your local Bindia in Østerbro, Nørrebro, Frederiksberg, Amager, Lyngby, and Søborg, or simply order it here.