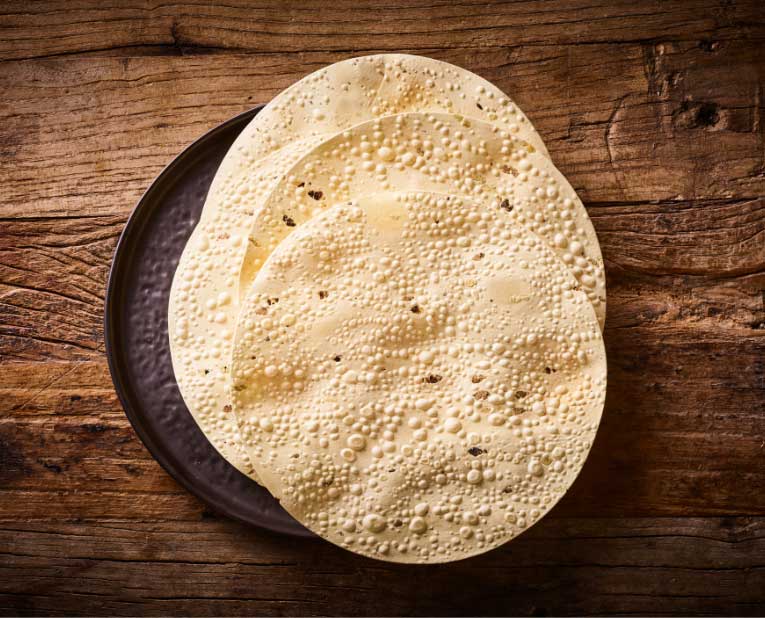 Even though it is sometimes referred to as a bread, the Indian Papadums are, in fact, more like a tortilla or large cracker. The name is originally from Sanskrit and means a flattened disc; yet it is still possible to encounter some slightly different names in the various languages spoken on the Indian subcontinent.

Though not a bread, they are often considered a gluten-free alternative to the various Indian side-order breads like Nan and Paratha, as the dough is made of flours made from lentils, chickpeas, potatoes, or millets, among other things. Salt and oil are added to make the dough, which can be further seasoned by spices like chili, cumin, garlic, or pepper. Therefore, there might be a significant different regarding how spicy a Papadum might be. The dough is either deep fried or roasted over open fire.

Bindia’s Papadums are made from lentils. They are medium in strength and seasoned with cumin and black pepper. As is customary many places in India, we always recommend one or more chutneys for our Papadums. Together, they make a fantastic appetizer!

Try our Papadums at your local Bindia in Østerbro, Nørrebro, Frederiksberg, Amager, Lyngby, and Søborg, or simply order it here.