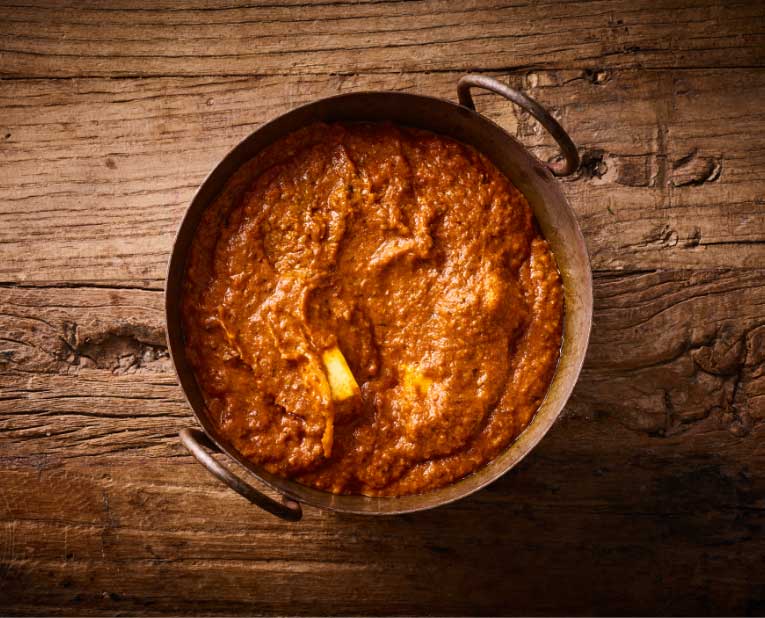 Paneer Tikka Masala is a dish, which elegantly balances a creamy and nutty taste and texture with a bite of ginger and cumin with traditional, fresh Indian cheese.

“Tikka” is a cooking tradition that goes all the way back to the rule of the Mughal Dynasty in Northern India. “Tikka” means “pieces” and refers to small pieces of meat or vegetables, which are marinated, put on skewers, and grilled in a very hot tandoor oven. “Masala” is the name for the uncountable spice blends both sold at the market or made from scratch in the Indian households.

The absolutely most famous version of the Tikka Masala is Chicken Tikka Masala with grilled chicken. In the West, it is not too uncommon to almost equate this dish with Indian food in general. Even though there is no unanimous agreement about where and how this famous dish originated, there is, nevertheless, almost a consensus that it was created by immigrants from India or Bangladesh in Great Britain as result of multiculturalism and culinary ingenuity. A few disbelievers claim it originated in India, but one thing is certain: Unlike in the West, the Tikka Masala lives a rather obscure existence within the borders of India.

Though the dish, by all accounts, is created by sheer luck and improvisation (as so many other things), it has become exceptionally popular in just a few decades. In Great Britain where it first emerged, it is so widespread that the then British Foreign Secretary Robin Cook in a speech in 2001 declared the Tikka Masala “a true national dish”. Cook’s reasoning was that the dish was “a perfect illustration of the way Britain absorbs and adapts external influences.”

The Paneer Tikka Masala is therefore created for grilled ingredients. It has a bit more punch of ginger and cumin but is simultaneously creamy and nutty to even out the dominating ginger and balance the final dish. Our head chef has perfectly mixed two worlds: bite and grease.

While “Tikka Masala” refers to the curry, “Paneer” is the name of a popular fresh acid-set cheese created from cow or buffalo milk, which constitutes the main ingredient in Paneer Tikka Masala. Paneer is no longer just popular in its home country but has gradually gained quite some traction in the West as well. Being low in fat and high in protein, this fresh and filling cheese has increasingly become a sought-after source of protein in many meat-free dishes.

As Paneer has a mild taste and open structure, it easily absorbs the taste from the food and spices that it is cooked together with, like the creamy nuts and the bite of ginger and cumin.

Try our Paneer Tikka Masala at your local Bindia in Østerbro, Nørrebro, Frederiksberg, Amager, Lyngby, and Søborg, or simply order it here.