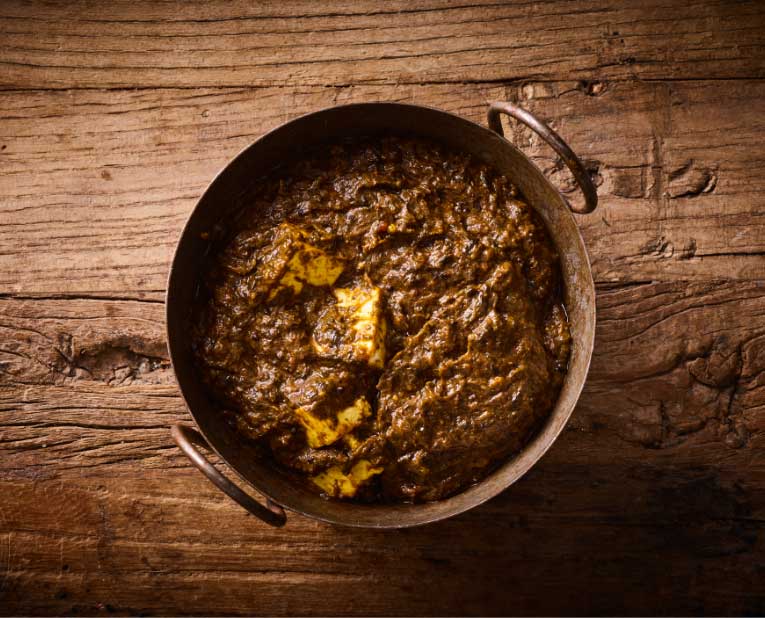 Bindia’s Paneer Spinach isn’t just delicious; it has everything you need to fill full and have your nutritional needs met.

In India, it’s normal to eat lots of the so-called cruciferous vegetables. These dark leafy greens can be found just about everywhere on Earth, and they include, besides spinach, broccoli, cauliflower, Brussel sprouts, kale, and mustard greens, among others.

The cruciferous vegetables are some of the healthiest things you can consume, and in the West, we are finally opening our eyes to their healing properties, which have being investigated in serious cancer research the last couple of decades.

Just to name a few things, this family of vegetables contains plenty of iron, calcium, fibers, as well as a host of different vitamins. By virtue of also being rich in protein, it’s understandable that the cruciferous vegetables like spinach have become a go-to food for the increasing number of health-conscious consumers as well as vegetarians and vegans.

Correspondingly, a survey from 2021 do indicate that about 40% of the country’s immense population identify as vegetarian, while this number is even higher in states like the country’s largest (by area) Rajastan where this accounts for 3 out of 4 people.

At Bindia, it’s therefore possible to order all of our delicious curries in a vegetarian version - in addition to our 8 decidedly vegetarian or vegan dishes.

We make our Paneer Spinach in the style of the Indian “Saag”. Saag just means leafy vegetables (typically referring to spinach) and is a form of curry made primarily on just one type of leafy green like spinach, chopped broccoli, mustard greens, collard greens, among others.

The Saag is a quite common dish in Northern India where it’s often served with bread. We use whole leaf spinach with another cruciferous green, i.e. fenugreek, as well as fresh tomatoes and garlic to add more fullness and flavor to the spinach.

While “Spinach” refers to the saag or curry, “Paneer” is the name of a popular fresh acid-set cheese created from cow or buffalo milk. Paneer is no longer just popular in its home country but has gradually gained quite some traction in the West as well. Being low in fat and high in protein, this fresh and filling cheese has increasingly become a sought-after source of protein in many meat-free dishes.

As Paneer has a mild taste and open structure, it easily absorbs the taste from the food and spices that it is cooked together with; in this case, the rich spinach with a twist of fenugreek.

Try our Paneer Spinach at your local Bindia in Østerbro, Nørrebro, Frederiksberg, Amager, Lyngby, and Søborg, or simply order it here.