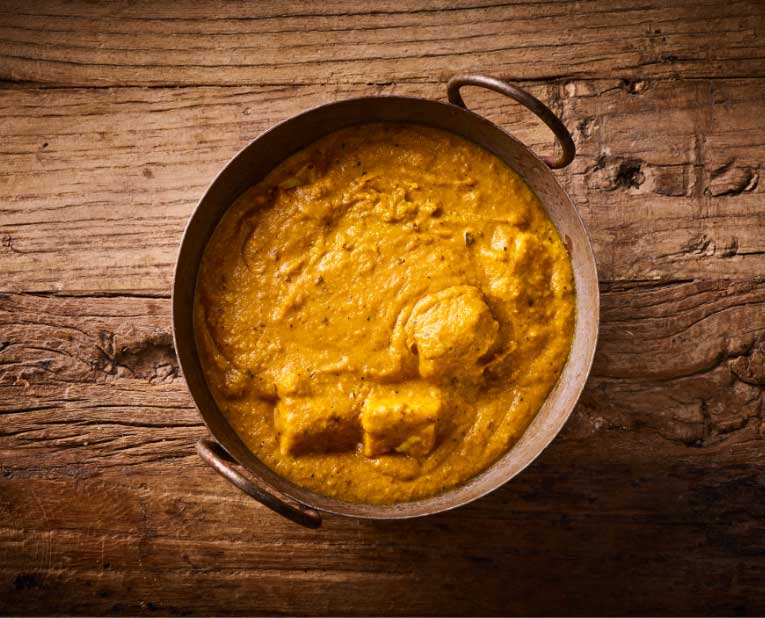 The Korma is a known Indian curry (sauce/stew) that can be traced all the way back to the 16th century and the rule of the Mughal Dynasty in Northern India. The curry was very popular in the Mughal court kitchens and is rumored to have been served at the inauguration of the Taj Mahal.

At Bindia, we make the Paneer Korma as they do in the mountainous regions like Kashmir and Punjab where Bindia’s founder was born and raised. Here, you typically eat much milder food than in Southern India. Moreover, nuts, instead of animal fat, are often central to the cooking process by providing lots of healthy and nutritional calories, which are so essential in these colder regions.

Consequently, we have a special focus on the nuts – especially cashew – in our Paneer Korma. As with our Butter curry, we have developed just the right mix of nuts and seeds for our Paneer Korma, which doesn’t just provide the dish with the healthy calories, but simultaneously produces an exquisite and creamy texture and a particular sweetness with subtle nutty nuances.

Altogether, it’s a quite complex dish demanding know-how and patience from the chef. In addition to nuts, this curry also requires plenty of onions, which are central to building the fundamental base of the curry, but also plentifully during the many phases of the preparation.

In Bindia’s Paneer Korma there’s plenty of ‘scent’ and ‘warmth’, which is derived from several temperings centered around ‘warm’ spices like cloves and cardamom.

Tempering is a specific spicing method common in India and its neighboring countries. During tempering, grinded spices are stir-fried at burning temperatures. When the crushed spices hit the boiling warm fat, they produce a heat shock response by discharging their essential oils and, thereby, rich flavor.

While “Korma” refers to the curry, “Paneer” is the name of a popular fresh acid-set cheese created from cow or buffalo milk, which constitutes the main ingredient in Paneer Korma. Paneer is no longer just popular in its home country but has gradually gained quite some traction in the West as well. Being low in fat and high in protein, this fresh and filling cheese has increasingly become a sought-after source of protein in many meat-free dishes.

As Paneer has a mild taste and open structure, it easily absorbs the taste from the food and spices that it is cooked together with; in this case, the ‘warm’ temperings in the sweet and nutty Korma.

Try our Paneer Korma at your local Bindia in Østerbro, Nørrebro, Frederiksberg, Amager, Lyngby, and Søborg, or simply order it here.