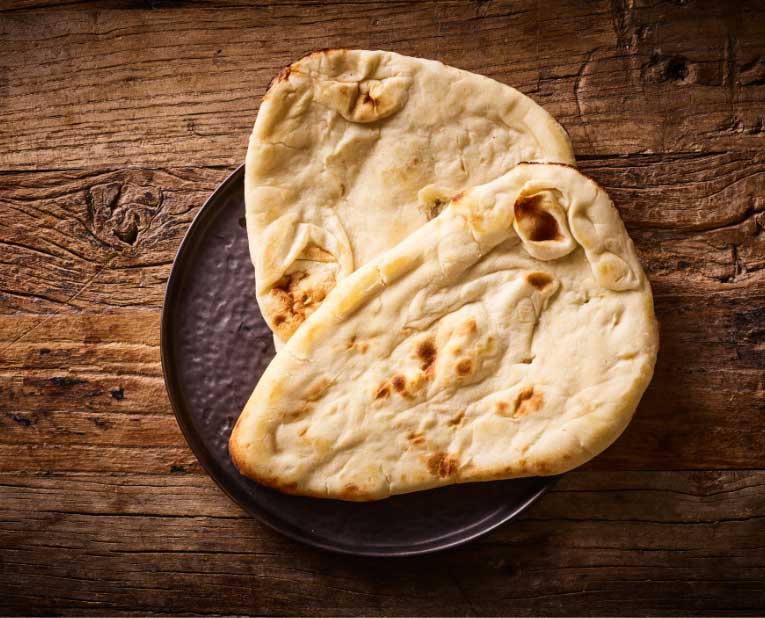 ”Nan” simply means ”bread” in the Persian language. Initially, the Indians ate bread like chapati and paratha. Nan, on the other hand, wasn’t introduced until the 16th century when the Islamic Delhi Sultanate began eating as a delicate breakfast for the royals. During the centuries-long Sultanate, Persian was the official language.

During the next couple of centuries, the Nan was gradually adopted by the general Indian public. Today, the Nan is found in slightly different forms, but with almost the same name, all over Central Asia and on the Indian subcontinent.

The Nan is prepared, just like some other kinds of Indian bread (sometimes) are, too. Depending on the type of food, a tandoor has several different cooking functions: for instance, you can grill meat or vegetables on skewers (a la shish kebab) or bake your Nan bread by attaching the dough to the burning hot walls. Here, the Nan just sits and bakes itself until it’s detached from the wall again.

Unlike many other Indian breads, the Nan is leavened and, therefore, quite fluffy. It partly became popular due to its longevity, which has earned it a regular spot at larger, festive gatherings.

A Nan can be prepared in many different ways with various tastes and fillings. It can be made a sort of fast-food wrap with ingredients like meat, cheese, or vegetables.

At Bindia, we focus on our curries and other main dishes. A ‘too special’ Nan bread can be dominating and might easily clash with the main dish. Therefore, we stick to the totally simple and classic Nan at Bindia.

Try our Nan at your local Bindia in Østerbro, Nørrebro, Frederiksberg, Amager, Lyngby, and Søborg, or simply order it here.