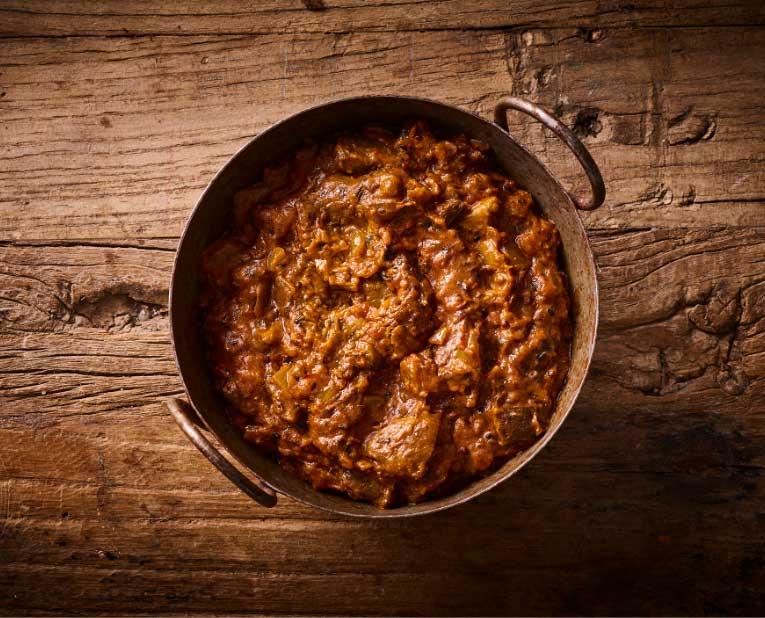 Mushrooms Fenugreek is a special dish where the Indian and Nordic kitchen meet. It’s only available at Bindia – and it’s even vegan-friendly.

The new and the old

Even though the Indian subcontinent is enormous with a great diversity of climates, agriculture, and ingredients, the use of mushrooms in cooking is a quite rare thing in India; especially since there are few places ideal for their growth.

The use of mushrooms was, therefore, not something Bindia’s founder really got familiar with before arriving in Denmark. “It was an exciting new world that opened up,” he says.

On the other hand, Fenugreek is far more common in the Indian kitchen. It is rich in fibers, antioxidants, vitamin B, and iron. By virtue of also being rich in protein, it is now wonder it has become a favored ingredient among the increasing number of health-conscious consumers as well as vegetarians and vegans.

Like in several of Bindia’s dishes, fenugreek is a staple of many kitchens in India, which is the world’s largest producer of fenugreek. The plant has a sweet and almost nutty taste, somewhat similar to syrup. That’s why it is also used in sweets in both Indian and Middle Eastern recipes.

However, fenugreek can be very bitter if eaten raw. If it’s prepared properly with other spices, on the other hand, it can transform the food by adding a special sweetness and depth of taste.

And the mushrooms? “They aren’t just delicious and healthy, but at the same time they are just as much a fantastic alternative for vegetarians,” says Amer Suleman.

Correspondingly, a survey from 2021 indicates that about 40% of the country’s immense population identify as vegetarian, while this number is even higher in states like the country’s largest (by area) Rajastan where this accounts for 3 out of 4 people.

At Bindia, it’s therefore possible to order all of our delicious curries in a vegetarian version - in addition to our 9 decidedly vegetarian or vegan dishes like our vegan-friendly Mushroom Fenugreek.

Bindia’s Mushrooms Fenugreek became our way of melting the Nordic and Indian kitchen. “I have always been fond of Fenugreek and its ability to provide taste,” says Bindia’s founder. In short, Mushrooms Fenugreek is, therefore, a delicious Indian dish with a Nordic touch from seasonal mushrooms and the classic temperings with Indian spices.

Tempering is a specific spicing method common in India and its neighboring countries. During tempering, grinded spices are stir-fried separately at burning hot temperatures. When the crushed spices hit the boiling fat, they produce a heat shock response by discharging their essential oils and, thereby, rich flavor. Our Mushrooms Fenugreek undergoes several temperings focused on warm spices like whole cumin and mustard seeds. The final dish is topped off with fresh coriander.

Try our Mushrooms Fenugreek at your local Bindia in Østerbro, Nørrebro, Frederiksberg, Amager, Lyngby, and Søborg, or simply order it here.