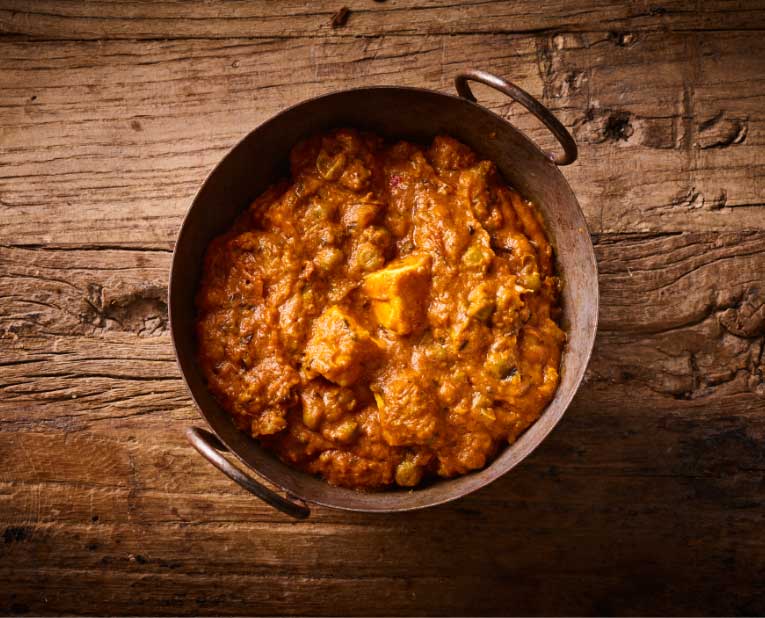 Bindia’s Mattar Paneer is a vegetarian classic served in a nutty and creamy North Indian curry.

While “Mattar” means peas, “Paneer” is the name of a popular fresh acid-set cheese created from cow or buffalo milk. Paneer has a mild taste and open structure, which means it easily absorbs the taste from the food and spices that it is cooked together with.

Paneer is no longer just popular in its home country but has gradually gained quite some traction in the West as well. Being low in fat and high in protein, this fresh and filling cheese has increasingly become a sought-after source of protein in many meat-free dishes.

No one knows exactly why Mattar Paneer initially became so popular in India, but the peas and paneer definitely work well together and are both common sources of protein for the many vegetarians in the country that, according to UN statistics, has the world’s lowest rate of meat consumption.

Correspondingly, a survey from 2021 indicates that about 40% of the country’s immense population identify as vegetarian, while this number is even higher in states like the country’s largest (by area) Rajastan where this accounts for 3 out of 4 people.

At Bindia, it’s therefore possible to order all of our delicious curries in a vegetarian version - in addition to our 9 decidedly vegetarian or vegan dishes like our vegetarian Mattar Paneer.

Mattar Paneer is made in many different ways depending where you are visiting on the enormous Indian subcontinent. We make our Mattar Paneer a la Punjab where Bindia’s founder himself is from. We therefore use our famous North Indian Butter-curry for our Mattar Paneer.

In many North Indian states like Punjab and Kashmir it is commonplace to cook with nuts instead of animal fat to ensure the food plenty of healthy and nourishing calories, which are so essential in these colder regions.

As with our Korma curry, we have developed just the right mix of nuts and seeds for our Mattar Paneer, which furthermore produces an exquisite and creamy texture.

Together with the sourish tomatoes and the honey, the nut mix furthermore gives this dish a particular sweetness with subtle nutty nuances.

Besides the special Bindia nut-mix, this curry is seasoned and flavored with not only the right spices, but also through an Indian cooking process called tempering, in which grinded spices are stir-fried separately at burning hot temperatures. When the crushed spices hit the boiling warm fat, they produce a heat shock response, which makes them discharge their essential oils and, thereby, rich flavor.

Our Mattar Paneer goes through four different phases of tempering, and we use a total of 23 different ingredients: all the way from the base of the curry consisting of just tomatoes, ginger, and garlic, to the more surprising contents like poppy seeds and licorice root.

Try our Mattar Paneer at your local Bindia in Østerbro, Nørrebro, Frederiksberg, Amager, Lyngby, and Søborg, or simply order it here.