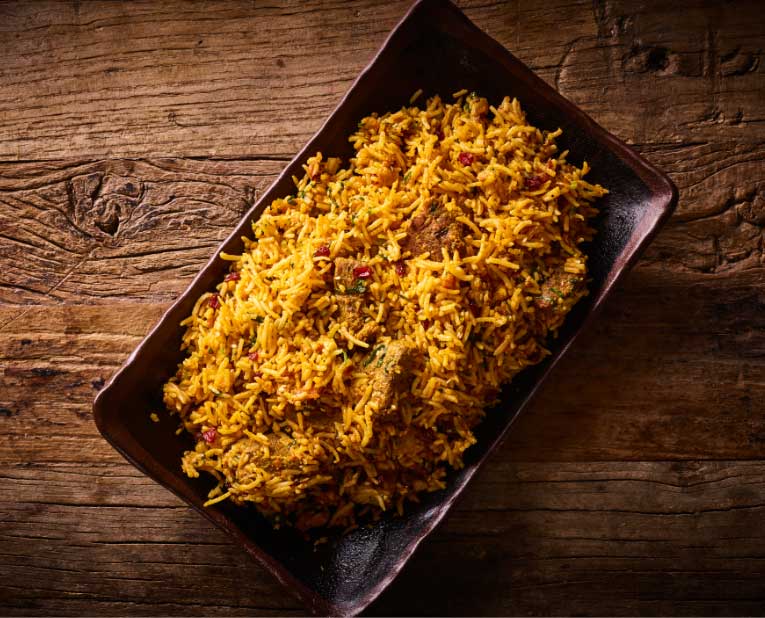 Lamb Biryani is just one of countless ways of making a delicious Biryani.

Universal and never the same

The name “Biryani” is originally from the Persian language as this was the official language in several Muslim dynasties at various periods and places in medieval India. And even though there’s no definitive consensus on the history of origin of the Biryani, everything clearly indicates its Muslim roots.

A common theory is that the modern Biryani emerged by the court kitchen of the Mughal dynasty during its reign in Northern India. Since then, this rice dish has become incredibly widespread in the rest of India, especially in the South and among the Country’s many Muslims.

The Biryani is so widely distributed and popular that it naturally has its own local peculiarities depending on where in this enormous country you get it. What is common to all kinds of Biryani is the mixture of rice and spices with vegetables, nuts, and/or meat; in brief, everything can be mixed into the complete rice meal that is the Biryani.

The most known Biryani comes from the city of Hyderabad, which is the state capital of Telangana. In the mid 19th century, the city became the cultural focal point of India and its neighboring countries, which resulted in a blending of many culinary traditions as well as the popularization of the Hyderabadi Biryani, which is known for being prepared in several layers.

At Bindia, we cook our Lamb Biryani with a special focus on nuts and seeds. In the mountainous North Indian states like Punjab, where Bindia’s founder is born and raised, it is common to use nuts in the cooking, instead of animal fat, to ensure lots of healthy and nutritional calories so essential in these colder climates. In Bindia’s Lamb Biryani we therefore have a distinctive focus on cashews as well as proper tempering.

During tempering, grinded spices are stir-fried separately in burning hot ghee (or oils suitable for such heat). When the crushed spices hit the boiling warm fat, they produce a heat shock response, which makes them discharge their essential oils and, thereby, rich flavor.

We only use grazing sheep from New Zealand in our Lamb Biryani, as this meat has the best smell and taste and doesn’t contain too much fat. We take measures to select for young, and therefore tender, meat, which we cut ourselves to ensure the final product is consistent with our standards.

We then roast the meat together with a tempering of ginger, carnation, and garlic, among others in a big cauldron. This removes the characteristic smell of lamb and gives the meat warm flavor and that Bindia character. All done in according to traditional procedures.

Try our Lamb Biryani at your local Bindia in Østerbro, Nørrebro, Frederiksberg, Amager, Lyngby, and Søborg, or simply order it here.