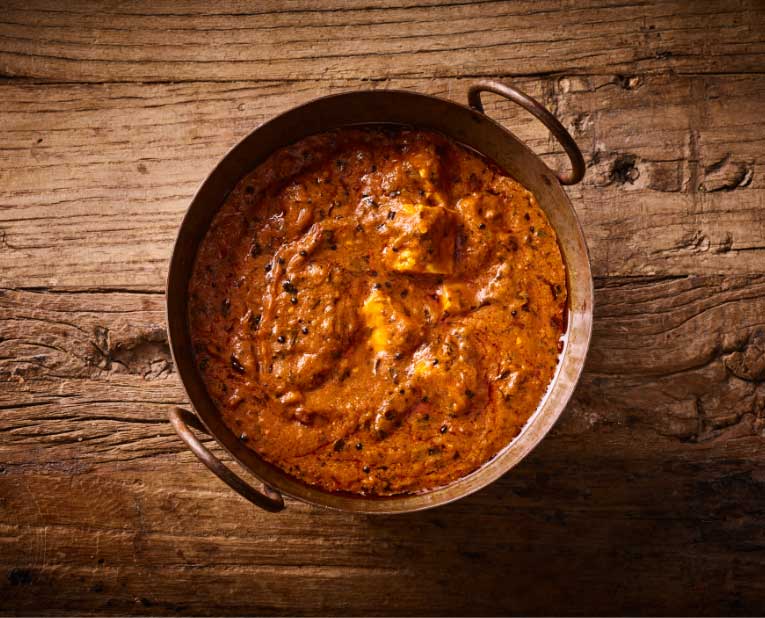 Attempting to say anything definite about Indian food is nearly an impossible task. In the immense and colorful country of India, there exists as many kitchens and culinary traditions as regions due to India’s great diversity of climates, agriculture, local traditions, and ingredients.

”I’m very inspired by the South Indian kitchen and particularly ingredients like coconut and tamarind”, says Amer Suleman. “The taste as well as the nutrition encapsulated in these ingredients is quite exciting for an adventurous chef. The inspiration for the Coconut Tamarind curry was more or less: “I wonder if I can create a nice curry from these two…””

On the one side of the Bindia spectrum, you’ll find the mild North Indian Korma and Butter curries, while at the other end, you’ll find the strong South Indian Madras curry. The Coconut Tamarind Paneer is more balanced and centered. It belongs to the same taste universe as the Madras curry but without the same intensity or amount of chili and mustard seeds. It might be conceived of as “South India for beginners” – semi-strong but with sweet Indian notes.

While “Coconut Tamarind” refers to the curry, “Paneer” is the name of a popular fresh acid-set cheese created from cow or buffalo milk. Paneer is no longer just popular in its home country but has gradually gained quite some traction in the West as well. Being low in fat and high in protein, this fresh and filling cheese has increasingly become a sought-after source of protein in many meat-free dishes.

As Paneer has a mild taste and open structure, it easily absorbs the taste from the food and spices that it is cooked together with, like the perfectly complimentary Southern ingredients of coconut and tamarind.

Try our Coconut Tamarind Paneer at your local Bindia in Østerbro, Nørrebro, Frederiksberg, Amager, Lyngby, and Søborg, or simply order it here.