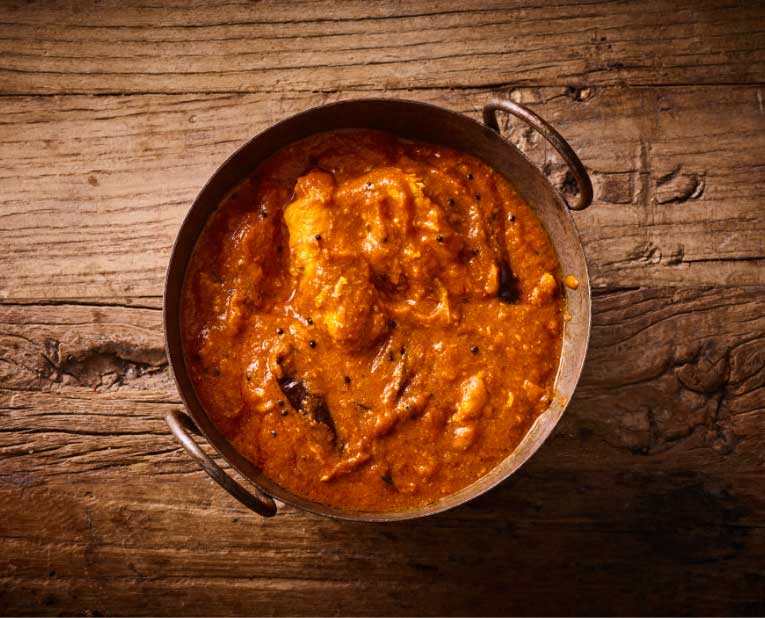 Bindia’s Chicken Madras is our head chef’s tribute to Southern India – and the healthiest thing on the menu.

Chicken Madras owes its name to its place of origin, namely the South Indian metropolis of Madras, today also known as Chennai. According to the legend, this dish received its name when English merchants visited the city in 1640.

In Southern India, you typically eat much more spicy food than in the North. That’s why the Chicken Madras is much hotter than our North Indian curries like our Korma and Butter Curry. As a matter of fact, the Madras curry is the strongest one on our menu.

“My mother’s father was an Ayurvedic doctor”, says Bindia’s founder and head chef Amer Suleman. “His treatments were always based on the customization of one’s diet.” The culinary philosophy of Bindia, therefore, rests on a profound respect and understanding of Ayurveda and the influence of food on one’s health and wellbeing.

”I’m very inspired by the South Indian kitchen and its vegetarian focus, and I have great respect for the culture and particularly ingredients like coconut, tomato, curry leaves, and tamarind”, says Amer Suleman. “The taste as well as the nutrition encapsulated in these ingredients and dishes is quite exciting. My Madras is a celebration of the South Indian kitchen and the healthiest thing we serve.”

The curry leaves play a big factor in both the taste of the Chicken Madras as well as its nutritional value. But so does the asafoetida, which is a spice extracted from the plant Ferula Asafoetida.

The asafoetida has a lot of healing properties, is rich in antioxidants, and is especially used in the aid of digestion. Asafoetida is also very common in dal dishes. Furthermore, asafoetida functions as a superb savory enhancer and is therefore an indispensable part of the temperings that our Madras undergoes.

Tempering is an Indian spicing method, in which grinded spices are stir-fried at burning hot temperatures. When the crushed spices hit the boiling warm fat, they have a heat shock response, which makes them discharge their essential oils and, thereby, rich flavor.

Together with whole curry leaves, we moreover use whole and fried chilis in our Madras curry, which provide a richer and rounder taste than mere chili powder as well as more substance.

Last, but not least, we use tenderloins from Danish chickens in our Chicken Madras. These we marinate in our own marinade of tandoori spices, which are spices that can handle the scorching heat of a tandoor oven. In our marinade these includes spices like ginger, turmeric, and fenugreek. Finally, we grill the meat at very temperatures to ensure that it doesn’t dry out, but stays juicy, tasty, and tender.

Try our Chicken Madras at your local Bindia in Østerbro, Nørrebro, Frederiksberg, Amager, Lyngby, and Søborg, or simply order it here.