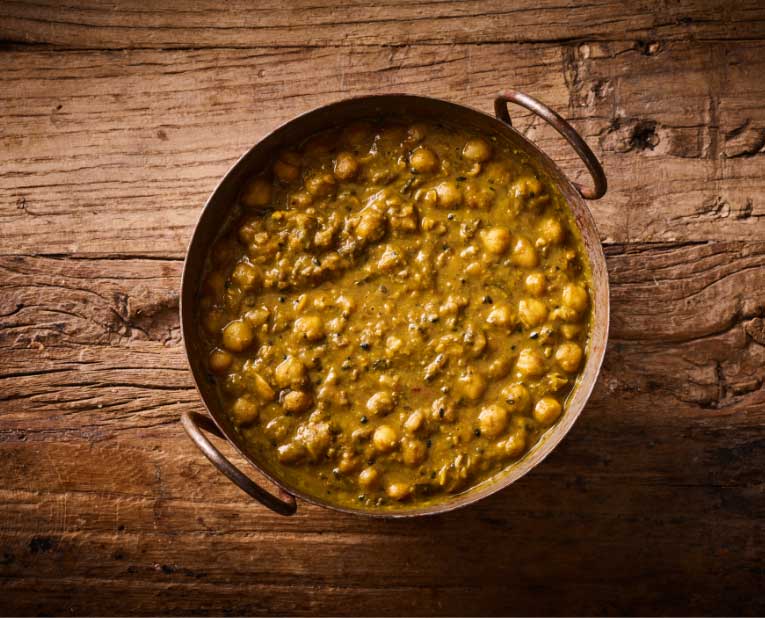 As ”Channa” means chickpeas and ”Masala” is the name of the countless spice blends sold on the market or made in the Indian households, Channa Masala can roughly be boiled down to meaning “spicy chickpeas”.

“This is a classic Indian ‘everyday-dish’ – and what you would might even call ‘street food’”, explains Amer Suleman, founder and head chef at Bindia. “One of my clearest memories was a guy just outside our school with a giant pot of chickpeas and nan-bread. That was my lunch all through my teenage years.”

There exist two kinds of chickpeas: the white ones we know in the West and the smaller and darker ones more common in India called “Desi Channa”. The common white type known in the West are called “Kabuli Channa” since they came from Kabul when they were first introduced in India during the 18th century.

Chickpeas are eaten all over the globe, probably due to their nutrient-dense nature. They contain, among other things, lots of fibers, minerals, iron, and phosphorus. By also being rich in protein, it’s quite understandable that chickpeas are a highly favored food among vegetarians and vegans.

Correspondingly, a survey from 2021 do indicate that about 40% of the country’s immense population identify as vegetarian, while this number is even higher in states like the country’s largest (by area) Rajastan where this accounts for 3 out of 4 people.

At Bindia, it’s therefore possible to order all of our delicious curries in a vegetarian version - in addition to our 9 decidedly vegetarian or vegan dishes like the vegan-friendly Channa Masala.

”Channa Masala is extremely popularized among street vendors in India”, Amer Suleman explains. “It is sold at stalls, street kitchens, and even by sellers boarding buses – and typically in a small newspaper cone with a squeeze of fresh lime on top.”

“I’ve been served Channa Masala too many times to even consider and in very different places all around India. As a consequence, I’ve developed my own recipe of what Channa Masala tastes like when it’s at its best. We use exciting spices like nigella seeds in the right combination and order, which really balances this dish – or snack, if you like.”

Try our Channa Masala at your local Bindia in Østerbro, Nørrebro, Frederiksberg, Amager, Lyngby, and Søborg, or simply order it here.