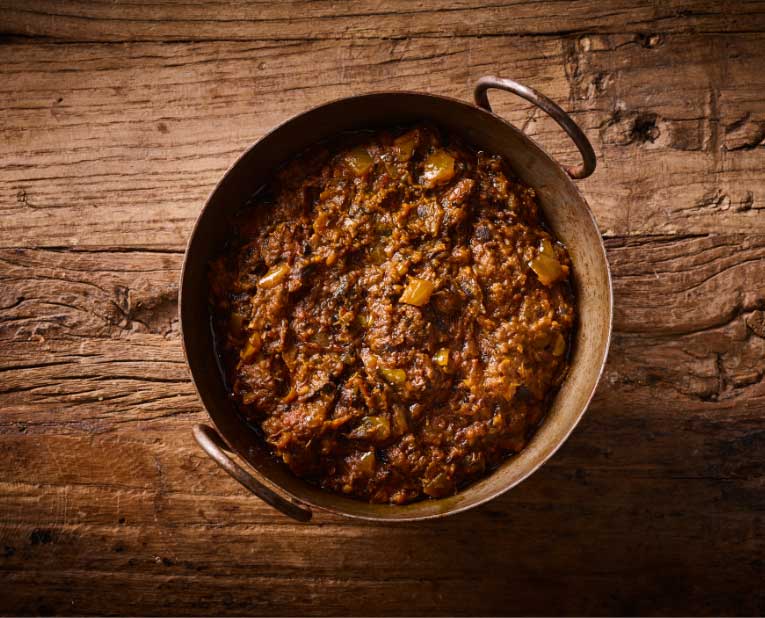 Bindia’s Bangan Burtha is an Indian tandoor classic made from scratch the traditional way.

”Bangan” means eggplant while “Burtha” refers to food prepared in an oven – a tandoor oven, to be specific.

A real, old-fashioned tandoor is more or less a large hole in the ground with walls of clay and burning coals or wood at the bottom, which produce temperatures reaching up to almost 500 °C.

Depending on the type of food, a tandoor has several different cooking functions: for instance, you can grill meat or vegetables on skewers (a la shish kebab) or bake a naan bread by attaching the dough to the burning hot walls.

The food in a tandoor is cooked by exposure to several different processes, like the scorching heat from the burning fire as well as hot air and smoking processes. As a result, a tandoor gives the food a special taste and smell, which is neither completely grilled nor baked.

From his Punjabi upbringing, Amer Suleman, founder and head chef of Bindia, recalls the central role the tandoor played in the local community – both as a culinary multitool as well as a social focal point.

You simply brought your own dough and other kinds of tandoor-ready food to your local tandoor where you paid the owner to cook what you’ve brought. Here you met with family, friends, and other locals while the kids were playing and the tandoor burning. Thus, an old-fashioned tandoor was often burning all day and could draw quite a crowd.

“Bangan Burtha was something we especially ate a lot during the summer”, Amer Suleman recounts. As with the other food, you brought your own eggplants to the local tandoor where they were placed in the ashes right next to the burning fire.

Here they would lie for up to two hours with the meaty middle of the eggplant almost boiling underneath its dark, protective peel. When they were taken out, they had their burnt peel removed, and their baked insides squashed into a pulp.

This eggplant pulp is in essence Bangan Burtha and can be used and prepared in several ways. It can be the main ingredient in a curry or be mixed with more crunchy stuff like onions, capsicum peppers, coriander, and chilis in a yoghurt as a healthy, delicious, and cooling summer salad.

At Bindia we are making Bangan Burtha from scratch: we use fresh eggplants, which we similarly bake in the oven. We mix the Bangan Burtha with a nice Jeera Masala Curry and lots of onion and ginger.

At Bindia, it’s therefore possible to order all of our delicious curries in a vegetarian version - in addition to our 8 decidedly vegetarian or vegan dishes like the vegan-friendly Bangan Burtha.

Try our Bangan Burtha at your local Bindia in Østerbro, Nørrebro, Frederiksberg, Amager, Lyngby, and Søborg, or simply order it here.