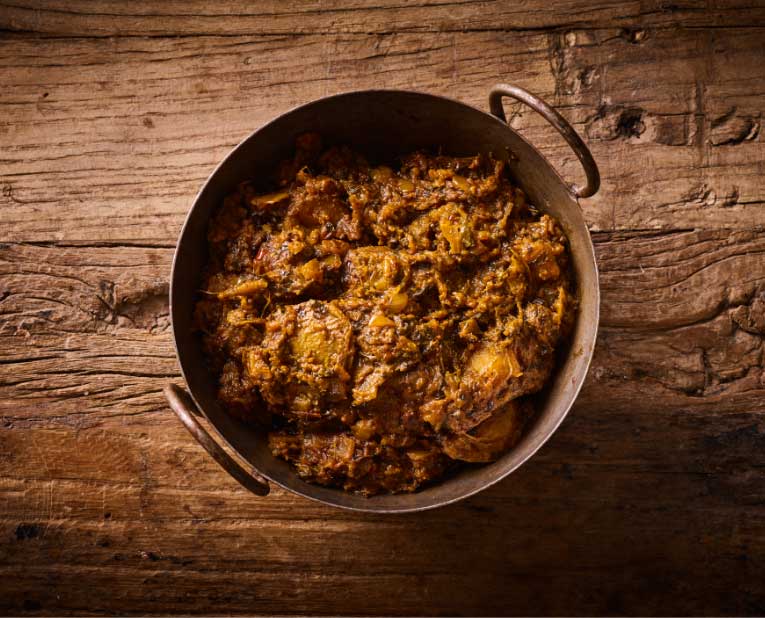 As with so many other Indian dishes, the name “Aloo Methi” refers to the main ingredients potato (aloo) and fenugreek (methi) in this well-known vegetarian dish.

Fenugreek is an herblike plant and a relatively common ingredient in India, where it’s mainly applied in 3 different ways.

The dried fenugreek leaves are crushed and milled and used as seasoning or as a part of the Indian spice blends known as Garam Masala. The seeds, on the other hand, are often sprouted for use in salads, among other things. Especially when sprouted, fenugreek seeds possess some great healing properties. Finally, the fresh leaves are used in a similar fashion to spinach in warm dishes like the Aloo Methi.

Fenugreek is rich in fibers, antioxidants, vitamin B, and iron. By virtue of also being rich in protein, it is now wonder it has become a favored ingredient among the increasing number of health-conscious consumers as well as vegetarians and vegans.

Fenugreek has been used by humans for at least 6,000 years. It has been applied in great ancient civilizations like Greece, Rome, and Egypt where it was deemed a medicinal herb. In Egypt, it was used to treat burns and induce childbirths while the famous Greek doctor and the “Father of Medicine”, Hippocrates used it to as a soothing herb.

Like in several of Bindia’s dishes, fenugreek is a staple of many kitchens in India, which is the world’s largest producer of fenugreek. The plant has a sweet and almost nutty taste, somewhat similar to syrup. That’s why it is also used in sweets in both Indian and Middle Eastern recipes.

However, fenugreek can be very bitter if eaten raw. If it’s prepared properly with other spices, on the other hand, it can transform the food by adding a special sweetness and depth of taste.

We first and foremost use lots of fresh fenugreek leaves in our Aloo Methi, which we make in the style of the Indian “Saag”. Saag just means “leafy vegetables” (typically referring to spinach or fenugreek) and is a form of curry made primarily on just one type of leafy green like fenugreek, spinach, chopped broccoli, mustard greens, or collard greens.

The flavoring of Bindia’s Aloo Methi happens through a so-called tempering, which is a specific spicing method common in India and its neighboring countries, in which grinded spices are stir-fried at burning hot temperatures. When the crushed spices hit the boiling warm fat, they produce a heat shock response and discharge their essential oils and, thereby, rich flavor.

Bindia’s Aloo Methi has everything you need to feel satiated and satisfied while getting all your nutritional needs met – and it’s even vegan-friendly.

Try our Aloo Methi at your local Bindia in Østerbro, Nørrebro, Frederiksberg, Amager, Lyngby, and  Søborg, or simply order it  here.