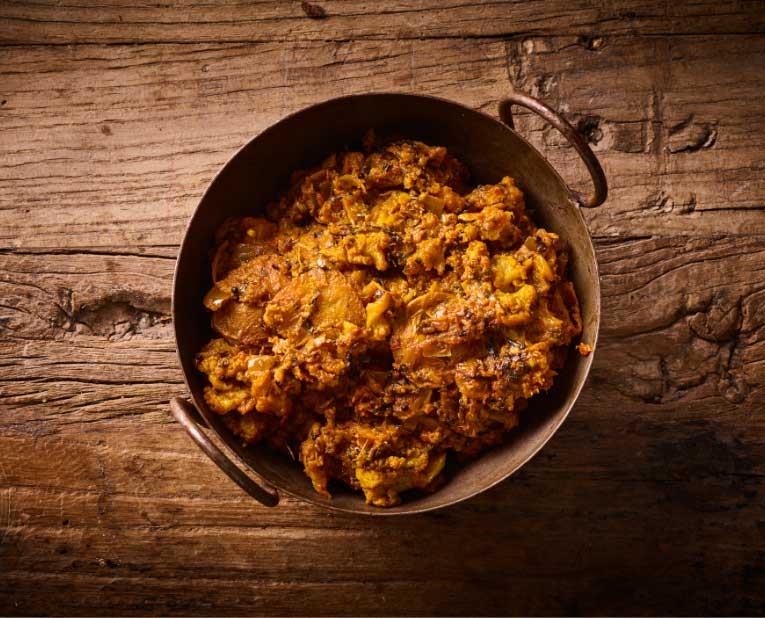 As with so many other Indian dishes, the name “Aloo Gobi” refers to the main ingredients potato (aloo) and cauliflower (gobi) in this well-known vegetarian dish, which often functions as a side dish at larger meals.

Even though this dish can be made in several different ways, the sight of the yellowish cauliflower is a very characteristic giveaway for Aloo Gobi, which gets its characteristic color from turmeric, which also causes the coloring of the most common curry powders.

This is a meat-free dish that has become especially popular in Pakistan and India, and Bindia’s version of Aloo Gobi is served as a vegan-friendly dish.

Correspondingly, a survey from 2021 indicate that about 40% of the country’s immense population identify as vegetarian, while this number is even higher in states like the country’s largest (by area) Rajastan where this accounts for 3 out of 4 people.

In addition to 9 decidedly vegetarian or vegan dishes, we therefore offer all of our delicious curries in a vegetarian version at Bindia.

Bindia’s version of Aloo Gobi is served as a vegan-friendly dish and besides the pan-fried potatoes and cauliflower, we have perfected the exact right mix of cumin and various seeds with chili and coriander.

The main flavoring of Bindia’s Aloo Gobi happens through two central temperings, which is a Indian spicing method, in which grinded spices are stir-fried separately at burning hot temperatures. When the crushed spices hit the boiling warm fat, they produce a heat shock response by discharging their essential oils and, thereby, rich flavor.

Try our Aloo Gobi at your local Bindia in  Østerbro, Nørrebro, Frederiksberg, Amager, Lyngby, and Søborg, or simply order here.